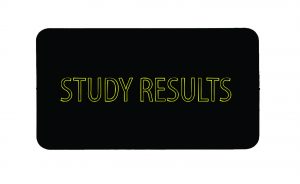 We came across an interesting Level 1 Trauma Center study that involved 1064 patients being cared for motorcycle spinal injuries from 2010 to 2015. Senior author, Nathaniel Brooks, MD an associated professor of neurosurgery at the University of Wisconsin School of Medicine and Public Health co-authored this study with 2 others.

The 5 year study showed that wearing a helmet significantly lowered the likelihood of cervical spinal injury.  Ironically this study was done in Wisconsin, a state that does not require the use motorcycle helmets by law.  We have attached a You Tube video From New 3 in Madison and the original article from Medscape Contributor Nancy Melville.   The National Highway Safety Traffic Administration (NHTSA) yearly conducts research on helmet use; HERE is their latest from 2015. The debate continues.

You Tube courtesy of NEWS 3 in Wisconsin.

“While our study does not explain mechanisms, the results show a significant association between wearing a helmet and a reduction in the risk of cervical spine injury,” senior author, Nathaniel Brooks, MD, an associate professor of neurosurgery, Department of Neurosurgery, at the University of Wisconsin School of Medicine and Public Health, Madison, told Medscape Medical News.

Despite substantial evidence of helmets protecting against head injuries and deaths in motorcycle crashes, resistance against helmet laws persists, with arguments including limitations of inherent freedom, restriction of vision and hearing, and the theoretical claim of an increased risk for spine injuries due to biomechanics related to the helmet. 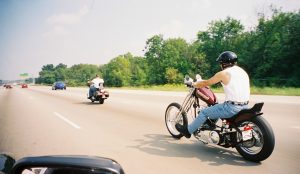 To better evaluate the role of helmets in cervical spine injury in motorcycle crashes, Dr Brooks and colleagues conducted a retrospective review of all patients treated at the University of Wisconsin Hospital’s level 1 trauma center following motorcycle accidents from January 2010 to January 2015.

The results were presented here at the American Association of Neurological Surgeons (AANS) 2017 Annual Meeting. 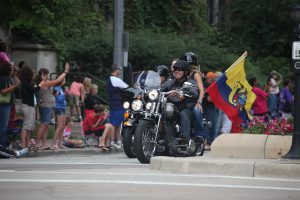 Un-helmeted riders were less likely to be discharged home vs to a facility (P < .001) and ad significantly higher mortality rates (P = .002).

The incidence of fractures of the C1 and C5 vertebrae were significantly lower among those wearing helmets (P = .04 and P = .01, respectively), as were injuries that were ligamentous (P = .04), and there were no statistical differences in the incidence of thoracic or lumbar fractures between the two groups.

“Our findings showed helmet use to be associated with decreased mortality, shorter ICU length of stay and shorter hospital length of stay,” first author, Paul Page, MD, a neurosurgery resident at the University of Wisconsin School of Medicine and Public Health, said in presenting the findings at the meeting.

Among previous studies proposing cervical spine risk linked to helmet use was research  published in 1986, describing a head-neck injury “trade-off” associated with use of motorcycle helmets, and suggesting that while “helmets reduce the severity of head injuries, past a critical impact speed, helmets increase the severity of neck injuries.”

Numerous studies since then have looked at the issue and shown no similar link with cervical spine injury. They include one multicenter study looking at different types of helmets ” full coverage and partial coverage ” which concluded that both types significantly reduced the risk for cervical spine injury compared with not wearing a helmet.

The authors of that study, which evaluated 5225 patients sustaining head injuries in motorcycle crashes in Taiwan between 2000 and 2009, concluded that the helmet design may have played a protective role.
“Wearing full-coverage and partial-coverage helmets significantly reduced the risk of cervical spine injury among head injury patients following motorcycle crashes,” they concluded. “This effect may be due to the smooth surface and hard padding materials of helmet.”
Dr Brooks noted that a host of additional factors in addition to not wearing a helmet, such as speed or blood alcohol levels, could represent important variables in the risk for cervical spine injury in a motorcycle crash, but in terms of sheer numbers, the study shows reduced rates with helmet use.
“We can’t say why, and the study does not show causation [of not wearing a helmet with cervical spine injury], but just in looking at the numbers from a level 1 trauma center, we see that patients wearing helmets have lower rates of these types of injuries than un-helmeted riders.”
The authors have disclosed no relevant financial relationships.
American Association of Neurological Surgeons (AANS) 2017 Annual Meeting. Abstract 693. Presented April 24, 2017.
For more Medscape Neurology news, join us on Facebook and Twitter
Posted in Featured News Content, Motorcycle Rides, News Content and tagged Helmet, Motorcycle Helmets, Spinal Injuries