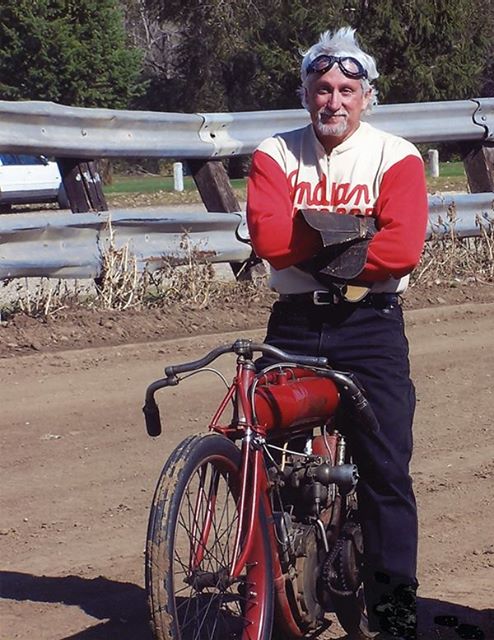 ANAMOSA, IA  | (RIP)  John Parham, motorcycle industry innovator passed away from a long battle with pulmonary fibrosis on Thursday, April 20th.  Parham 62, was a forward thinker along with his wife Jill and son Zachery building many of the golden jewels in the motorcycle industry.

A racer, innovator, builder and business mogul John founded the National Motorcycle Museum, a destination whose story compasses the history of motorcycles and the drips with passion for the sport.  Motorcycle enthusiasts have also come to know Parham’s J& P Cycles brand,  J & P, a leader in mail product cataloging provides aftermarket parts while delivering complete excellence in customer service and knowledge.

Today the motorcycle industry remembers John’s gentle spirit, kind heart and his commitment to his family and friends.  His passion for motorcycles; vintage and current along with his development of events and promotions innovation made Parham a one-of-a-kind force.  A memorial service will be held in early May.

In John’s honor please check Organ Donation on your license, it gave John, his family and this industry an additional 7 years.  Rest in peace John and condolences to Jill, Zachery and the Parham family.  He will be deeply missed not only by his family but the motorcycle world.  RIP.

When John Parham was 16 years old he undertook a tactical maneuver that would change his life. He ran away from home for two day to make his parents understand how important it was for him to buy a BSA. His parents finally agreed, John bought the bike and immediately turned it into a chopper.

In 1975, two years after graduating from high school, John Parham’s dream of owning a motorcycle shop. It became a reality when he joined with his high school science teacher and they opened D&J Cycles in Anamosa, Iowa.  John and his mechanic Ron would work at the shop during the day and his partner Don would come in the afternoons, relieving John to head off to his full time job at the local factory.

In 1979,  John went on his own and created J&P Cycles. This was also when he began attending weekend swap meets with some regularity, buying and selling used parts. He left his job in 1982 and, with his wife Jill, began investing all of his energy and time in his own business. And it paid off.  In 1987 John published the first J&P Cycles catalog, a 24 page masterpiece and a tool for riders that would grow beyond even John’s expectations.

Always the innovator, John began promoting events throughout Iowa and Wisconsin. This venture became so lucrative that he created J&P Promotions, quickly expanding nationwide with over 50 annual events stretching from California to New Jersey. He promoted motorcycle swap meets, bike shows, hill climbs, motorcycle rodeos, dirt track races and the All Harley Drag Races. John went on to create the AHDRA Western Drag Race division to bring All Harley Drag Racing back to the west coast. He started the J&P Promotions Bike Show Super Series which included bike shows across the country for both metric and v-twin motorcycles. A true vintage enthusiast, John was instrumental in starting and promoting the annual Davenport Antique Flat Track race.  This event still takes place each year during the Blackhawk Chapter Annual meet of the Antique Motorcycle Club of America.

Jill joined the company full time in 1992, becoming his right hand and managing the business end. It gave John the opportunity to put all of his energy in developing new ways to bring a variety of products to an ever increasing riding population. Their partnering proved successful and in 2004, J&P Cycles 25th anniversary, they earned Dealer News Magazine’s prestigious Best Independent Dealer award.

John Parham’s gift is understanding the needs of riders and filling that need by delivering a product to them efficiently and economically. His vision and exceptional ability to keep one step ahead of the game has allowed him to live his dream and become successful doing it. In 2006 J&P Cycles has not one, but three motorcycle product catalogs. One for Harley-Davidson models, 1144 pages; another for metric models, 600 pages; and a third for vintage models, 340 pages. It appears that all of his hard work has paid off.