Article is courtesy of  MICHAEL KITCH of the LACONIA DAILY SUN | March 22, 2017

GILFORD — After a hiatus of five years, the hill climb, long a signature feature of Laconia Motorcycle Week, will return to the ski jump at Gunstock Mountain Resort during the 94th running of the “World’s Oldest Motorcycle Rally” in June.

The Gunstock Hillclimb, sanctioned by the American Motorcycle Association and sponsored by Ridge Runner Promotions , will be run at the 70-meter ski jump at on Wednesday, June 14 — come rain, come shine — beginning at 9 a.m.

“We’re very pleased that the hill climb is coming back to its original location at Gunstock,” said Charlie St. Clair, executive director of the Laconia Motorcycle Week Association. “I know this will make a whole lot of people very happy during Motorcycle Week.” 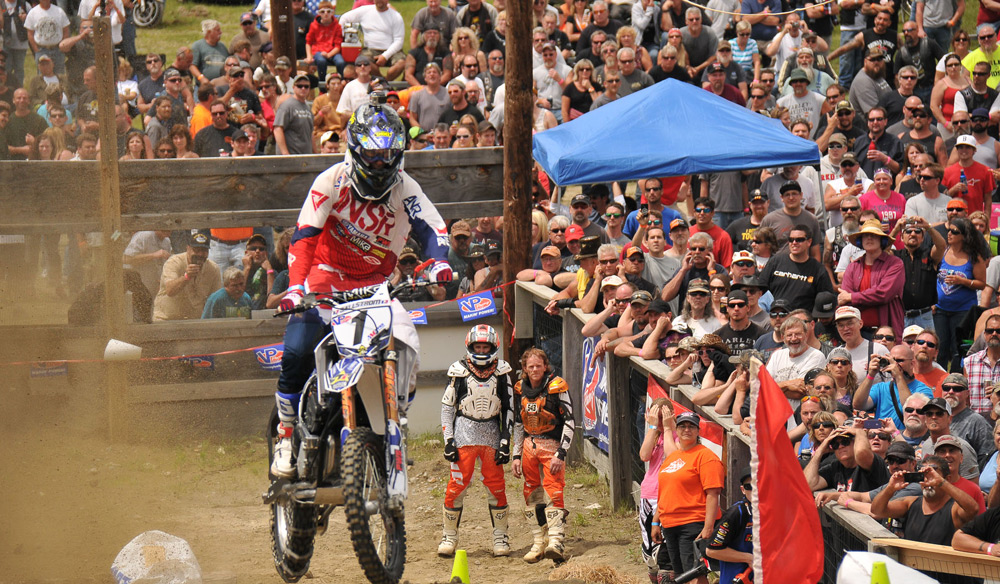 He expressed his appreciation to the management of Gunstock, especially Marketing Director Mike Roth and General Manager Greg Goddard, as well as the members of the Gunstock Commission, for their decision to resume hosting the event.

The hill climb was run at Gunstock 1946 until 1962 and again from 1993 until 2011, when Ridge Runner Promotions, which sponsors the event, and management of the resort failed to renew their contract. For the past five years Ridge Runner Promotions held a competition in the Pro Hill Climb Series sanctioned by the American Motorcycle Association at the organization’s site in Canaan.

Goddard said on Wednesday that in anticipation of celebrating the resort’s 80th anniversary Roth began reviewing its history and was taken by the tradition of hosting the hill climb. He reached out to the hill climbers among the motorcycling community, beginning with the New England Hill Climbers, who soon passed the baton to Mike Farnsworth of Ridge Runner Promotions.

Roth said that he was impressed that the hill climb was a tradition that ran deep and long and thought “My gosh, tell me all about it.” He recalled that when Chris Chartier of the New England Climbers told him that his father ran the hill climb before him and his son was about to follow in their tire tracks, he realized it is “a multi-generational thing people feel passionate and nostalgic about.” The hill climb, he said, is in keeping with Gunstock’s character as a community and familial resort, where parents have passed on their experience to their children.

Goddard said that after some negotiation Gunstock and Ridge Runner Promotions reached an agreement and entered a contract, by which a share of the proceeds from the event would be applied to restoring and maintaining the hill after the event and the balance split between the resort and the sponsor. He said that the Ridge Runners will stage the hill climb itself, while Gunstock will manage the logistics of parking, camping, crowd control and food and beverage service.

“We’re really excited to have it back,” Goddard said.”It fills a hole in the schedule for Motorcycle Week and generates revenue for the resort between the winter and summer seasons.”

Belknap County Commissioner Dave DeVoy, who urged the Gunstock Commission to host the event, said he was disappointed when the hill climb moved to Canaan and pleased that the longstanding event has been revived, not least because it will strengthen the financial performance of the resort. Speaking as a business owner, he noted that trade at his gas station and convenience store on Lakeshore Road dropped off significantly in the middle of the rally without the hill climb.

St. Clair said he is pleased that the hill climb will be limited to amateur riders.

“An amateur is a big draw, because the odds of getting to the top are a lot less,” he explained, “and if you don’t make it, you’ve got get your bike back down that steep hill. It’s quite a feat either way,” recalling his own experience of getting 20 feet shy of the top and having to get down to the bottom.

“I was petrified,” he confessed.