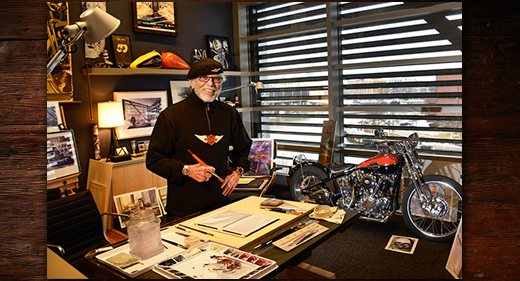 STURGIS MOTORCYCLE MUSEUM TO HONOR WILLIE G. DAVIDSON with the Lifetime Achievement Award.
Sturgis, South Dakota, March 28, 2017 – Considered the patriarch of motorcycling by bikers around the globe, William G. Davidson’s artistic vision and passion for riding have not only shaped Harley-Davidson’s® identity for more than 50 years, they have transformed the entire motorcycle world. Affectionately known as “Willie G.” by millions of motorcycle enthusiasts, Harley-Davidson’s Chief Styling Officer Emeritus and Brand Ambassador is set to be honored with the Lifetime Achievement Award at the Sturgis Motorcycle Museum Hall Of Fame Induction ceremony, August 9, 2017.
“Willie G. is not just a brand ambassador for Harley-Davidson, he is an ambassador for biker culture worldwide,” said Myrick Robbins, executive director of the Sturgis Motorcycle Museum & Hall Of Fame. “The Museum’s goal is to ‘Honor the Rider’ and Willie G. is the embodiment of motorcycle riding.” Already a pre-2001 member of the Sturgis Motorcycle Museum Hall of Fame, Willie G. was joined by his lovely wife Nancy in the Class of 2010.

“Just like Sturgis Rally founders Pearl and Pappy Hoel, Willie G. and Nancy have made a long-term, positive impact on the motorcycle community,” added Robbins. “You could say Willie G. was born with gasoline in his veins.”

A Wisconsin native, Willie G. went to The University of Wisconsin for three years before transferring to the Art Center College of Design in Los Angeles. He joined Harley-Davidson in 1963, when he was invited to set-up the company’s motorcycle design department. In 1981, Davidson was one of 13 executives who raised more than $75 million to purchase Harley-Davidson from AMF Incorporated.

In addition to Lifetime Achievement honoree Willie G., The Sturgis Motorcycle Museum Hall Of Fame Class of 2017 features a group of over-achievers and true leaders who have influenced an entire era of motorcycling:
The Hall of Fame Ceremony will sell out, get your tickets HERE