Daytona Beach, FL (March 24, 2017) – The first Sons of Speed race is in the books and for all who attended, they can attest to what an epic event it was. On race day a dozen vintage motorcycle racers mustered their courage and skill to take on the daunting ½ mile banked asphalt track at New Smyrna Speedway in New Smyrna, Florida. In the final heat Brittney Olsen of 20th Century Racing took the checkered flag, with Matt Harris of 40 Cal customs taking second place with Shelly Rossmeyer-Pepe of Bruce Rossmeyer’s Daytona Harley-Davidson rounding out the third spot.

“The reality is that everyone who raced a bike on that track did something that has not been done in almost a century, we made history.” said Billy Lane, renowned bike builder and founder of Sons of Speed. “Every racer and spectator knows in their heart that Sons of Speed was more than an event, it was a camaraderie and kinship that was shared by all. We look forward to our next race in Sturgis at the Full Throttle Saloon.” 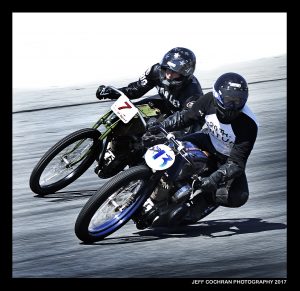 Inspired by early twentieth-century board-track racers, the bikes raced in Sons of Speed were stripped down, no clutch, no brake pre-1925 1000cc American V-Twin motorcycles. Most of the bikes were ground up builds with some being finished just before race-time. The over 2000 spectators in the stands had a birds eye view as racers came by at speeds of over 80 mph with closely raced heats.  In the end Brittney Olsen took home the coveted Bill McCann custom made one of a kind trophy causing some to wonder if is should be called Sons and Daughters of Speed. For now we are sticking with Sons of Speed.

With such groundswell of support for the Daytona Sons of Speed race, Billy has decided to host another Sons of Speed event on Tuesday August 8th at the Full Throttle Saloon as well as another event at New Smyrna Speedway during Biketoberfest on Saturday October 21st. The race at the Full Throttle Saloon will be a dirt track surfaced with clay (to keep it firm) with high banks and will include Pre-1930 1000cc class and 1000cc+ class.

The race could not have been possible without the support from Erin Lane, Speed and Strength, Bruce Rossmeyer’s Daytona Harley-Davidson, Sons of Speed announcer Barry Boone, trophy sculptor Bill McCann and our volunteer track officials.

About Sons Of Speed