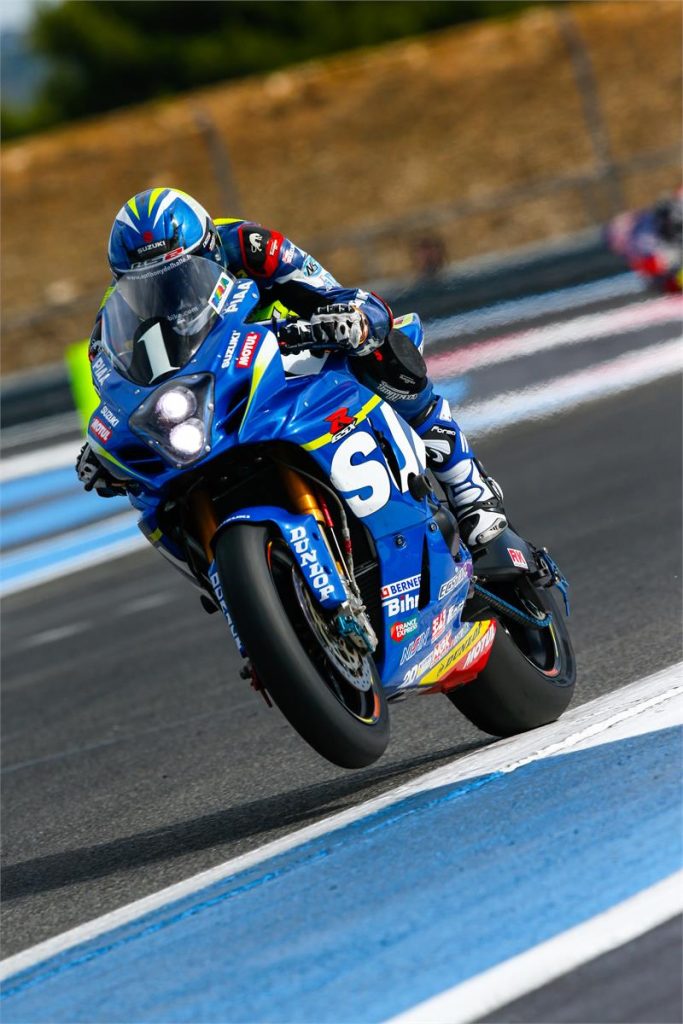 Delhalle was a veteran member of the 15-time FIM World Endurance Championship-winning SERT team, and was part of the winning 2016 effort with Vincent Phillipe and Etienne Masson.

It is with sadness that we announce the tragic loss of our distinguished rider Anthony Delhalle.

Eminent symbol of the SERT team, the talented pilot, who has won five titles of Endurance World Champion with Suzuki, succumbed to his injuries yesterday morning following a crash during the Nogaro test in France.

Anthony Delhalle, 35, was a pure French talent of speed and one of the best representatives of endurance motorcycle racing.

A strong defender of the Suzuki brand during his career, Anthony first joined the brand by entering into the Junior Team of Damien Saulnier and has proved his strength and legitimately found his place in the prestigious SERT of Dominique Meliand.

Anthony was a major rider in EWC, remarkable for his speed and regularity in this discipline which he loved so much.

All our thoughts go to his wife and 2 children, family and people who love him.

Suzuki Endurance Racing Team (SERT) rider Anthony Delhalle unfortunately succumbed to injuries sustained in a crash during testing at the Nogaro Circuit in France on Thursday. The team was present at the Nogaro private test with several other endurance teams as part of preparations for the 24 Hours of Le Mans FIM World Endurance race in April. French media state eyewitness reports that the 35-year-old Frenchman put a wheel off into the wet grass (it had recently rained) near the end of the 0.6-mile front straight and crashed heavily, tumbling through the grass runoff without hitting anything or the bike. Suzuki-Racing.com listed he reportedly suffered a cervical spine injury that stifled any attempts at resuscitation by rescue personnel.

“It’s incredible and inexplicable. I feel like a part of me has gone,” said teammate Vincent Philippe.

Delhalle was a veteran member of the multi-championship SERT team for six years, winning five world titles with the team along with three world titles with other Suzuki teams. The Frenchman began his endurance racing career with the QERT (Qatar Endurance Racing Team) that led to a short stint in the Moto2 World Championship series, before joining SERT in 2011. He is survived by a wife and two children. Sport Rider extends its deepest condolences to the family and friends of Delhalle.

The FIM endurance racing champion Delhalle was testing been test  “Anthony came out straight, without reason or loss of grip,” said teammate Vincent Philippe to Motorsport.com.